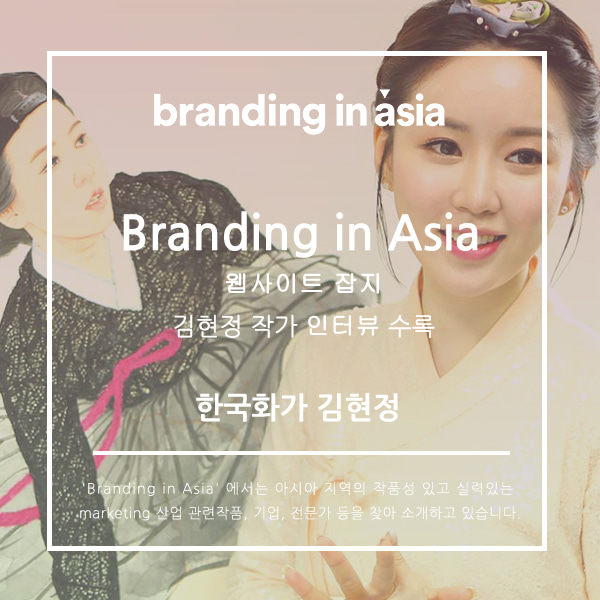 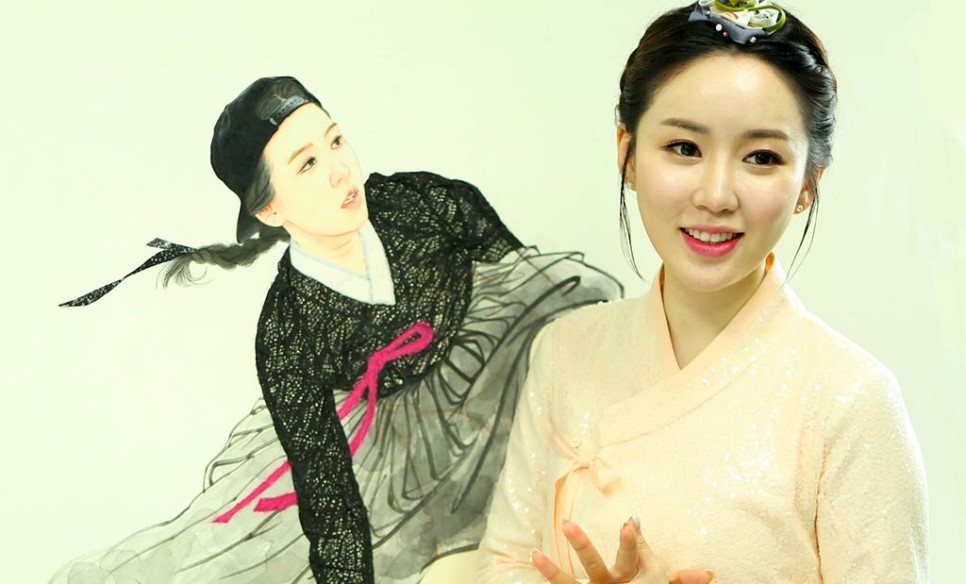 Creative Trends and Working with Brands

by painting outside the lines of

how women are traditionally perceived in a rapidly-transforming South Korean society.

Kim’s work, which combines the use of paint and paper,

does not necessarily reflect

a more mischievous character within.

silhouette of her nude body

underneath as she merrily engages in behavior outside the typical norms.

Be it speeding through the streets on a scooter, gorging herself with junk food or

myriad other scenarios that Kim paints her subject into.

The talented artist’s work has also drawn the attention of brands such, Samsung, Perrier and Coca-Cola, which commissioned Kim for a campaign for the Olympics that included a tip of the hat to the South Korean women’s curling team

who emerged as the darlings of the international media during the

Branding in Asia recently spoke with Kim about her art, her work with brands and more. 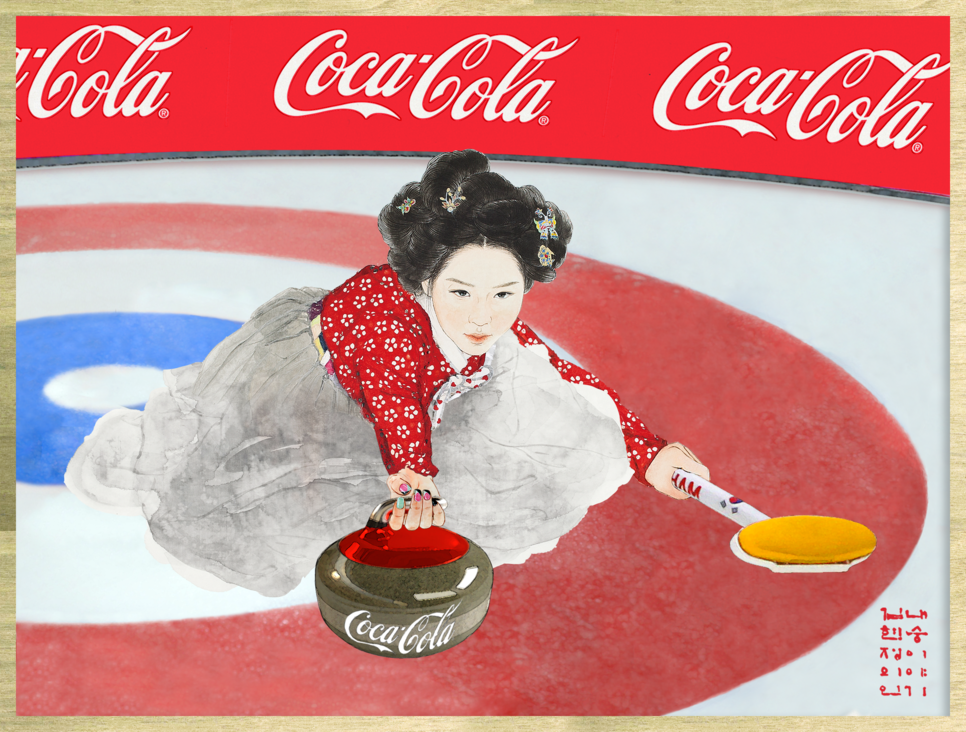 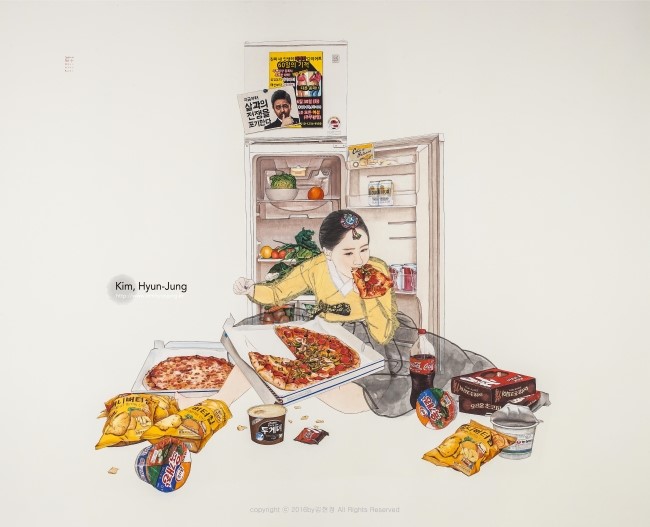 Can you talk about your creative process and what inspires your work?

All of my work translates into drawing self-portraits by looking

into myself as if I was writing in a diary.

As a result, every aspect of my daily life becomes the source of inspiration.

However, not every part of life becomes a subject for my work.

outcomes as subjects on which the message itself can be expressed with wit.

These days, I have also been drawing after hearing stories on the radio,

and experimenting with the “collective intelligence” of netizens in trying out “social drawing.”

I have somewhat a unique process for working on projects.

1. First, the actual drawing is possible only after having direct experiences with everything

about the subject. I incorporate the real-time feelings at the time of these experiences into the conceptualization process of the project.

3. Sketch it out on hanji (traditional Korean paper)

4. Draw a nude sketch of the character. 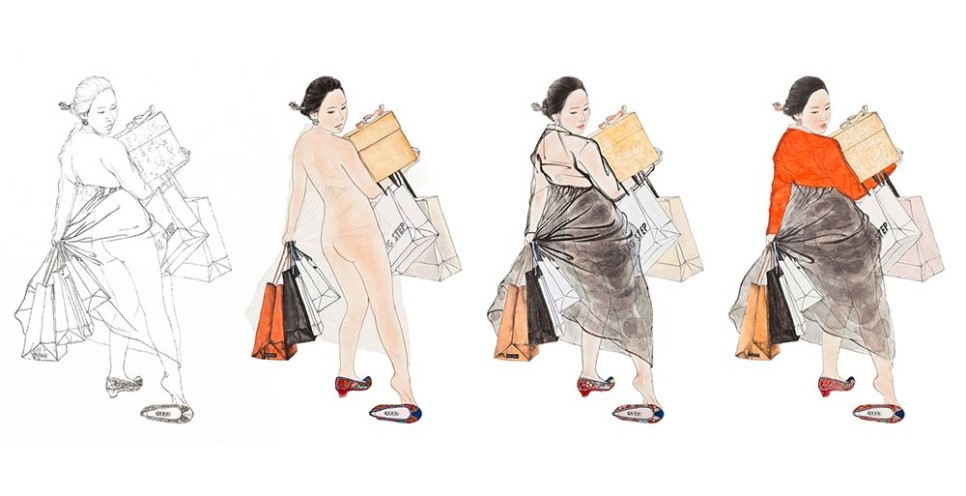 5. Use black ink to draw the traditional Korean dress.

7. Create a collage of the upper garment, using the colored hanji.

Your work for Coca-Cola campaign during the Olympics in Korea received praise in the international media. How did that relationship come about?

I’ve also been riding that wave by taking on art collaboration projects.

Coca-Cola, which planned an art marketing strategy for the 2018 Pyeongchang Winter Olympics,

After negotiations and signing the deal, my projects included curling, short track, and bobsled events.

celebration of the Winter Olympics while enjoying Coca-Cola.

Like any other project, the Coca-Cola project went through numerous discussions and

reviews during the preparation process.

Ultimately, that resulted in some great work. 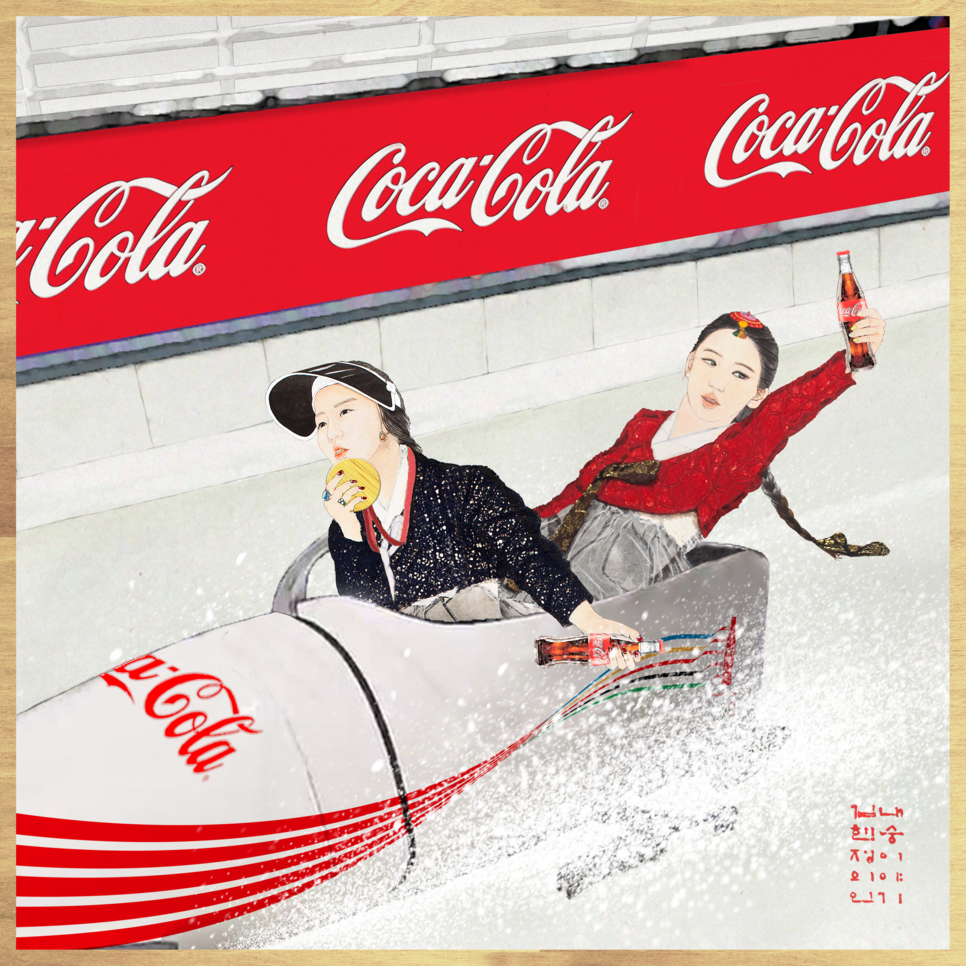 You’ve done work for several different brands. From an artistic point of view, how is the approach different from your own personal work?

My dream is a society where art and daily life are more greatly infused.

which art can be enjoyed outside of the galleries,

with the brand was a very attractive one.

From an artistic perspective, the major difference between my own projects and

collaboration with brands is that the

corporations’ needs must be sufficiently reflected in the art, rather than my own.

Obviously, you do not want to lose your own color,

so a lot of adjustments must be taken into account

while coming to an agreement (with the brand).

However, through that process, it is possible to gain fresh ideas and learn new techniques and

enhance the level of completion through new experiences.

For example, I did some work with The Korean Horse Racing Association.

Personally, it is difficult to draw a horse even if I wanted to draw one.

This is because without directly observing and experiencing it,

capturing the right expression is not easy.

The Korean Horse Racing Association allowed me to experience riding

a horse and observe the horses as much as

I wanted so I was able to focus on the project. 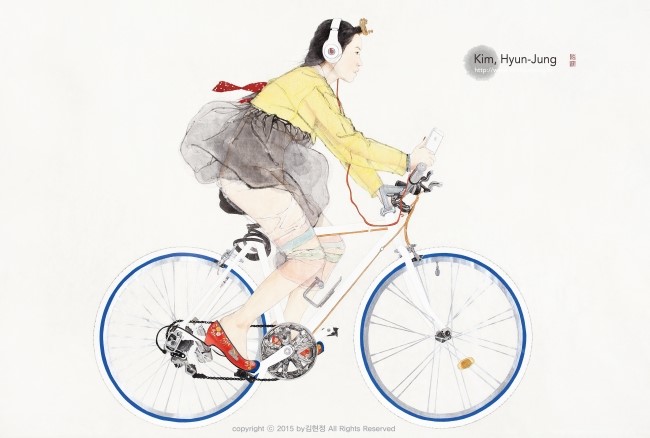 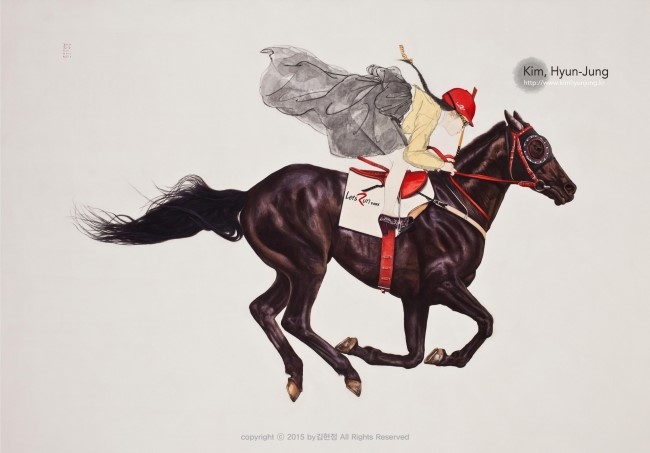 The use of fine art in advertising is rare. Do you think more brands should adopt this approach in their ad campaigns?

A company’s concern is that its products appeal to consumers.

The daily advertisements that flood the market are set with increasingly

However, as consumers have become smarter, they are no longer easily captivated

Rather than one-hit-wonders, they prefer advertisements that resonate with them.

From the art collaboration perspective, for example, famous movies were either digitized or

borrowed from in the production of advertisements.

This method aimed at engaging consumer consciousness for those

who were familiar with the movies being used.

From the same perspective, art collaboration demonstrates an example of

advancements in such strategies.

As the term ‘artsumer’ has become a trend in Korea,

The projects that our team is working on in collaboration

with brands are being reborn to demonstrate the

product’s advantages in the most effective ways by using attractive images.

that there will be great opportunities for more artists. 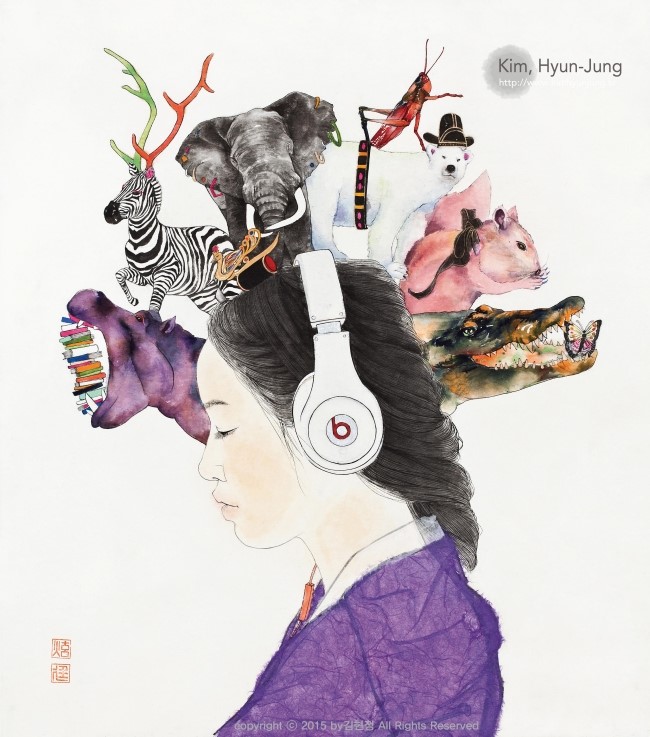 What are some trends in the Korean creative scene that you like?

by engaging with a wide range of people.

Everyone talks about the fourth industrial revolution.

It implies the transformation of the industrial environment,

in which automation and connectivity are maximized through artificial intelligence.

Accordingly, new technologies such as AI, AR, VR, 3D and 4D are flooding the market

to appropriate the 4th industrial revolution.

The field of art is not an exception in the age of the fourth industrial revolution.

Also, a painting was done by Deep Dream, the Google’s AI artist,

recreated the unique painting style, colors, and oil painting texture of the original arts through imitation.

It has become possible to recreate the painting styles of deceased artists.

Rather than ignoring the changing times, I believe it is appropriate to not only keep pace, but stay one step ahead,

and utilize these technologies in attempting to create interesting works.

It could be an opportunity to pioneer a new field. It would be similar to Nam-Joon Park’s video arts.

It was very interesting to exhibit digitized old paintings, and by chance,

I had the opportunity to create a 3D print of the coy woman, which was new and the experience was very interesting.

Everything becomes interesting when new things are tried and learned.

So, I feel fortunate that I was born in Korea, where both changes and adaptations to new things are instantaneous.

Creative fields in Korea will advance in many ways and

I will attempt to accept and adapt to these changes as quickly as possible.

As I’ve mentioned earlier, I believe that one has to be open to new and different experiences.

Shouldn’t a true artist have such a mindset?

I do not have any tendency to resist or dislike any of the creative fields that are trending.

What is some of your artwork you’ve done over the years that you are most proud of?

Each project spans about six months, hence I am proud of every one of them.

As people give a birth-name to a child, I give birth-names to my works.

So, although it is difficult to single out one piece, I am especially attached to some of the earlier works and

those works that required a lot of time to complete.

For example, the work “Acha-Ramyon” was a project that allowed the public to discuss coy stories.

And “Coy: You who move me”, was a project that enjoyed an interesting response overseas and was

better known by the name, McDelivery.

Although Cinderella was used as its motif, “Coy: Big Fish”, which was a sarcastic story about Cinderella,

who dreamed of social status advancements through marriage, was also one of my favorites.

See a whole lot more of her work here: www.kimhyunjung.kr 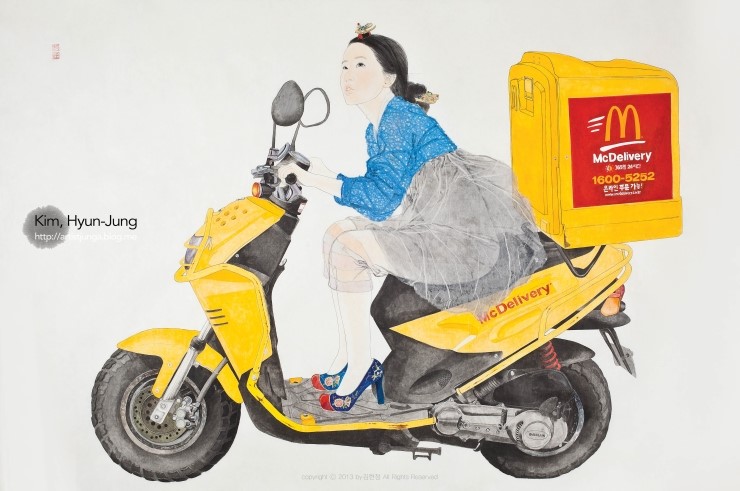